Galactic Basic and the Aurebesh

In a universe where a civilisation can span a galaxy, there needs to be a way to communicate clearly with friends (and enemies) across the stars. In the Star Wars universe this language is Galactic Basic, also known as Galactic Standard or simply 'Basic', which has it's own alphabet known as Aurebesh.

Basic is spoken across the galaxy and was the primary langauge of the old Republic and the Galactic Empire, although it is not the only common language; some factions have their own official languages, such as Huttese which is used by the Hutts and is common within their territories. Wookiees, among other species, are unable to speak Basic due to their differing physiology but can still learn to understand it.

You may have spotted some instances of the Aurebesh in the movies and other media and a lot of them, especially in newer media, can be translated. Luckily, the glyphs used in the aurebesh transliterate easily into English, as you can see in the images below. 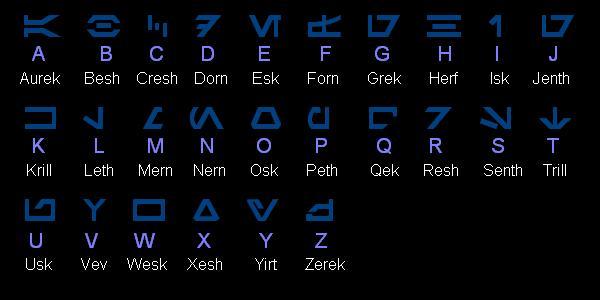