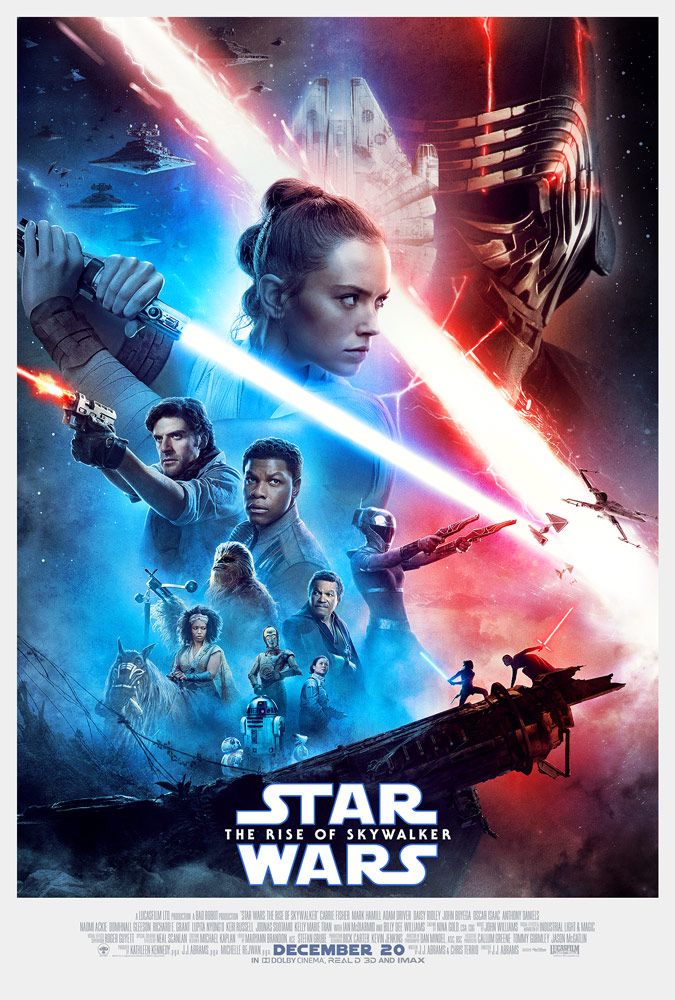 The dead speak! The galaxy has heard a mysterious broadcast, a threat of REVENGE in the sinister voice of the late EMPEROR PALPATINE.

GENERAL LEIA ORGANA dispatches secret agents to gather intelligence, while REY, the last hope of the Jedi, trains for battle against the diabolical FIRST ORDER.

Meanwhile, Supreme Leader KYLO REN rages in search of the phantom Emperor, determined to destroy any threat to his power....

Star Wars: The Rise of Skywalker is the final episode of the Star Wars sequel trilogy, and will also mark the end of the entire Skywalker Saga.

It was originally slated to be directed by Colin Trevorrow, until he left the project in September 2017. JJ Abrams then returned to helm the film, and close off the trilogy he launched with The Force Awakens.

The title and teaser trailer were revealed at Star Wars Celebration Chicago in April 2019.

Star Wars: The Rise of Skywalker is set for release on 20 December 2019.

This will be John Williams' last Star Wars movie.

Colin Trevorrow was originally set to direct, and he apparently worked closely with The Last Jedi director Rian Johnson to ensure continuity between their respective movies. Trevorrow left the project in September 2017 due to “creative differences”, and Disney had to pay off Paramount Pictures to secure JJ Abrams, as he had previously breached contract with them during The Force Awakens.

Carrie Fisher was due to have a larger role in Episode IX, and when she tragically passed away in December 2016 the story team “pretty much started over”, according to Kathleen Kennedy. Unused footage from The Force Awakens and The Last Jedi has been repurposed to allow Fisher to complete the Star Wars saga.