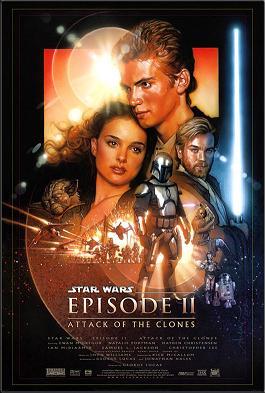 There is unrest in the Galactic Senate. Several thousand solar systems have declared their intentions to leave the Republic.

This separatist movement, under the leadership of the mysterious Count Dooku, has made it difficult for the limited number of Jedi Knights to maintain peace and order in the galaxy.

Senator Amidala, the former Queen of Naboo, is returning to the Galactic Senate to vote on the critical issue of creating an ARMY OF THE REPUBLIC to assist the overwhelmed Jedi....

The film introduces the infamous Clone War, first mentioned in the original film as a conflict that Obi-Wan Kenobi and Anakin Skywalker fought together in, and also provides additional backstory for the fan favourite bounty hunter Boba Fett.

Attack of the Clones was the first Star Wars movie that didn't top the box office charts for it's year of release. Despite a respectable gross of over $600 million it finished fourth, behind Lord of the Rings: The Two Towers, Harry Potter and the Chamber of Secrets, and Spider-Man.