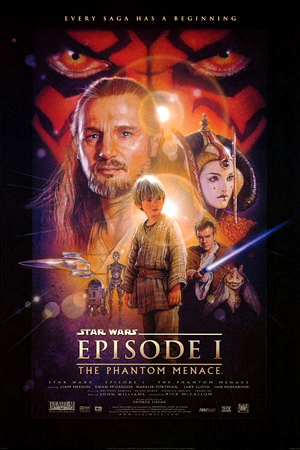 Turmoil has engulfed the Galactic Republic. The taxation of trade routes to outlying star systems is in dispute.

Hoping to resolve the matter with a blockade of deadly battleships, the greedy Trade Federation has stopped all shipping to the small planet of Naboo.

While the Congress of the Republic endlessly debates this alarming chain of events, the Supreme Chancellor has secretly dispatched two Jedi Knights, the guardians of peace and justice in the galaxy, to settle the conflict....

Star Wars: Episode I - The Phantom Menace is the first instalment of the prequel trilogy, set 32 years before the original movie.

It introduces a young Anakin Skywalker, who is living as a slave on Tatooine. It also features the Galactic Republic and the Jedi Order before their downfall.

Production started in 1997 after Star Wars creator George Lucas determined that digital visual effects technology had advanced to the stage where he could realise his ambitious plans to tell the backstory leading up to the original Star Wars trilogy.

The Phantom Menace was the highest grossing film of 1999, and following a 3D re-release in 2012 its world-wide takings surpassed $1 billion.

Benicio Del Toro was at one point slate to appear as Darth Maul, until Maul's lines were severely reduced.

The word "lightsaber" is never mentioned. When Anakin refers to Qui-Gon's weapon he calls it a "laser-sword".

Coruscant, the capital world of the Republic, was first named in the Timothy Zahn novel Heir to the Empire.

In the Galactic Senate, several members of ET's species can be seen. George Lucas has said he included them as a tribute to his friend Steven Spielberg.

Natalie Portman and Kiera Knightley look so similar when in full make-up and costume that it is almost impossible to tell who is who. Even Portman's mother had difficulty telling them apart when she visited the set.

Despite being a relatively upbeat peice of music, Anakin's Theme is actually a variation of the Imperial March (Darth Vader's theme).

Jabba the Hutt is listed in the credits as being played by himself.

After the end of the credits, you can hear Darth Vader's ominous breathing.

A freak sandstorm damaged several sets while filming in Tunisia. Lucas saw this as a good omen, as the same thing happened while filming for the original Star Wars movie 20 years earlier.

A movie theatre in Canada showed the trailer a day early, so 20th Century Fox banned them from showing the movie.

Jake Lloyd quit acting after criticism of his portrayal of Anakin Skywalker, and the general poor reaction to the movie. He did however attend several fan conventions and reprise his role as a voice actor for video games.