Who were the Dark Lords of the Sith?

For over a thousand years the Galactic Republic reigned unhindered, protected by Jedi Knights who swore to uphold peace and justice across the galaxy. But beneath the surface lay a shadowy faction bent on exacting their revenge.

Peace is a lie. There is only Passion.
Through Passion I gain Strength.
Through Strength I gain Power.
Through Power I gain Victory.
Through Victory my chains are Broken.
The Force shall free me.

The Code of the Sith


The Sith were an ancient order of dark-side wielding Force-users. They were once numerous, commanding armies against the Republic until an all-out war resulted in their extinction… or so the Jedi thought.

During a period that became known as the Hundred-Year-Darkness a former Jedi who was dissatisfied with the ways of the Jedi founded the Sith Order. The Sith believed in harnessing emotions such as anger to fuel their connection to the Force, and this drew them into conflict with their former brethren in the Force. The Sith were forced into exile by the Jedi, and settled on Moraband where they constructed huge temples and spread out, enslaving planets such as Malachor and Yavin 4.

During the Jedi-Sith war, the Sith succeeded in capturing the Republic capital world of Coruscant, along with the Jedi Temple itself, but the ultimate downfall of this age of the Sith would be their own greed, as they turned on each other in their quest for power.

At the conclusion of the Jedi-Sith War Darth Bane stood as the sole survivor of the Sith Lords. He realised that infighting had sealed their fate and allowed the Jedi to gain the upper hand in the conflict. Only by limiting their own numbers could the Sith survive: operating in the shadows to avoid attracting the attention of the Jedi. He enacted the Rule of Two, proclaiming that there could be only two Dark Lords of the Sith at one time; a master and an apprentice. This way the Sith would master every aspect of the Force and pass on their knowledge until they had finally achieved the power of immortality.

They Jedi were fooled by this ploy, and believed that the oppression of the Sith had finally been vanquished.

Centuries passed and the Sith Lords learnt much more about the Force. Darth Plagueis the Wise, as he would become known, mastered the secrets of manipulating the midichlorians to create life. This was a vital step in obtaining the immortality the Sith craved, and crucial to destroying the Jedi. 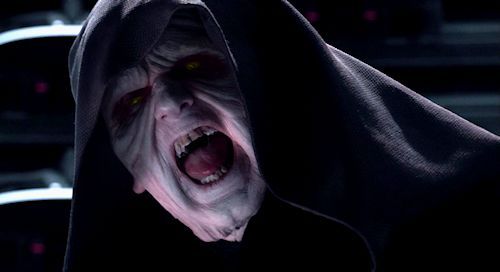 Once more the Sith will rule the galaxy, and we will have peace.

Plagueis’ own apprentice was well placed to further the Sith agenda. Darth Sidious, or Sheev Palpatine as he was known to the public, was born to a wealthy family from Naboo. With help from his master, Sidious rose through the political ranks to represent his homeworld in the Galactic Senate, where he saw it's corruption firsthand.

When Sidious was certain his position of power was secured he secretly acquired his own apprentice from the Nightsisters of Dathomir, and killed his master while he slept.

Using his political know-how he forced a conflict within the Republic while he played both sides: Sidious promised power to the greedy Trade Federation and orchestrated a blockage of his home planet of Naboo, while Palpatine gained favour in the Galactic Senate. His plan paid off and through his shrewd political dealings he positioned himself as Supreme Chancellor of the Republic.

The Jedi spent considerable effort trying to crack the mystery of the Sith, but such was Sidious’ skill with the dark side of the Force he was able to conceal his identity from Jedi Council members, including Yoda and Mace Windu.

By manipulating both sides of an escalating conflict, Sidious was able to gather more political support and stayed in power long past his term. When his identity was finally discovered and revealed, the Jedi rushed to stop him. Sidious proclaimed that this action was a Jedi plot to overthrow the Republic and declared that he would continue to serve the people as Emperor.

Sidious personally issued Order 66, which commanded the clone army of the Republic to turn on the Jedi. With their ranks devastated, Yoda and Obi-Wan Kenobi engaged the Sith Lords but failed to topple them and were forced into exile leaving the Galactic Empire to rule the galaxy. 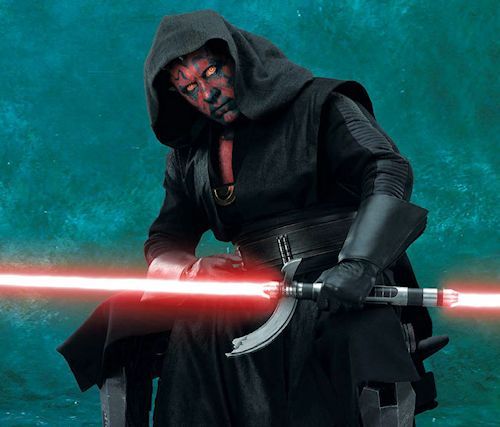 Sidious raised his first apprentice from infancy to be a blunt weapon to hurl against the Jedi. The Zabrak, Darth Maul was fearsome to behold and was a highly skilled assassin and lightsaber duellist.

When Jedi Knights whisked the Queen of Naboo away from danger during the Trade Federation blockade, Sidious sent Maul to track them down. The Sith revealed their existence and the Jedi were taken completely by surprise. Jedi Master Qui-Gon Jinn fell to Maul's blade, but his padawan Obi-Wan Kenobi avenged his death, slicing Maul in half and sending him plummeting down a reactor shaft.

Maul wasn’t about to let a little thing like that stop him: clinging on to life through his rage, as he fell he used the Force to grab onto an air vent and escape death. After a decade of convalescence he formed his own criminal army known as the Shadow Collective, and in the chaos of the Clone War he conquered Mandalore. Unfortunately for Maul, his plans jeopardised those of his former master, and Darth Sidious confronted and defeated him.

After losing Mandalore, Maul became the head of the criminal syndicate known as Crimson Dawn, and plotted against his former master and successive apprentices until he was thwarted by the Jedi Kanan Jarrus and Ezra Bridger.

Eventually, he would learn that Obi-Wan Kenobi had survived the Jedi Purge, and vowed to to destroy him for taking his true destiny from him, only this time Kenobi finished the job. 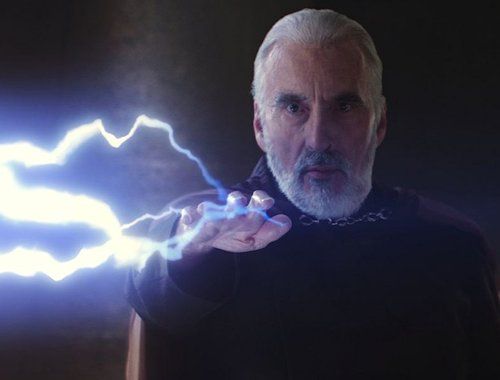 To replace Maul, Sidious reached out to former Jedi Master Dooku, who had left the Jedi Order to reclaim his wealth and title of Count of Sorenno. Dooku had also seen the stagnation of the Republic and the arrogance of the Jedi. He became Darth Tyranus and helped his master orchestrate the secret creation of a clone army for the Republic, and oversaw a separatist movement to rise against the Republic.

Tyranus was highly skilled with both a lightsaber and the Force and managed to escape the Jedi at the Battle of Geonosis, an event that was used to ignite the war that Sidious needed to accelerate the Sith plot.

With Sidious leading the Galactic Republic and Tyranus leading the Confederacy of Independent Systems, the galaxy was soon embroiled in a civil war that spread the Jedi thin across the galaxy.

Hundreds of senators are now under the influence of a Sith Lord called Darth Sidious.

Tyranus was wary of his master and secretly trained at least three apprentices of his own with the intention of overthrowing Sidious, and even tried to coax Obi-Wan Kenobi to his side.

During the last years of the Clone War, Sidious engineered the kidnapping of his alter ego Chancellor Palpatine, and pitted Tyranus against the young Jedi Knight Anakin Skywalker. Skywalker quickly overpowered the Sith Lord, and spurred on by Palpatine he killed Tyranus. 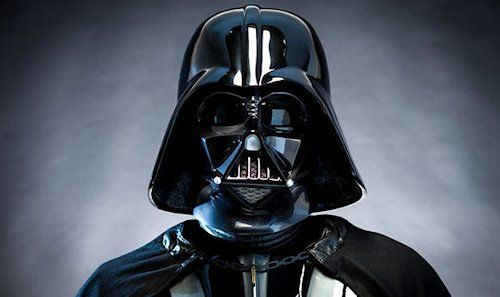 When Qui-Gon Jinn discovered young Anakin Skywalker, he believed the boy to be the Chosen One of a Jedi prophecy that foretold the ultimate destruction of the Sith.

Sidious watched with interest as Skywalker grew in the Force, safely ensconced within the Jedi Order. It would take years of careful grooming to win him to his side, so in the guise of Chancellor Palpatine, Sidious became a friend and confidant to Skywalker, all the while sowing seeds of distrust of the Jedi in his mind.

Soon I will have a new apprentice. One far younger, and more powerful.

After the defeat of Count Dooku, Skywalker discovered that Palpatine was really the Sith Lord the Jedi had been looking for all along. Sidious claimed that only he could prevent Anakin’s wife from certain death, but despite this Anakin told Jedi Master Mace Windu, who then took a contingent of Jedi Knights to face the Dark Lord of the Sith.

Disobeying Windu’s order to remain at the Temple, Skywalker returned to the Chancellor's office to find Windu preparing to vanquish Palpatine. Sidious pleaded for Anakin to save him, convincing the him that this was all part of a plot to overthrow the Republic. Skywalker’s intervention lead to Windu’s death, and he took his place at Sidious’ side as Darth Vader.

Vader's first task was to take a unit of clone troopers to the Jedi Temple and slaughter the Jedi that remained there.

Vader was severely injured in his duel with his former master, Kenobi, but Sidious saved him and encased him in a specialised suit to preserve his life. He served as the Emperor's executor, operating mostly outside the Empire's regular chain of command, and hunting down Jedi who had slipped into hiding.

The ability to destroy a planet is insignificant next to the power of the Force.

Years later Vader found himself aboard the Empire’s new ultimate weapon, the Death Star, and faced and defeated Kenobi. A young man named Luke Skywalker gained fame amongst the rebel Alliance to Restore the Republic by rescuing rebel leader Princess Leia and destroying the Death Star. When Sidious and Vader learnt of “the son of Skywalker”, they vowed that he would be turned to the dark side or destroyed.

Vader attempted to turn Skywalker to the dark side, intending to overthrow Sidious and rule the galaxy with his son at his side, but ultimately Skywalker refused and escaped. Vader obsessed over relocating Skywalker, and spent considerable resources on this goal.

On Endor, as the Rebel Alliance mounted a mission to destroy the second Death Star, Vader was again confronted by Skywalker, who hoped to turn Vader back to the light side of the Force. Vader denied there was any conflict within him and turned Skywalker over to the Emperor as he had been ordered.

True to form, the Emperor goaded Skywalker into fighting his apprentice. When Vader lay defeated Sidious offered Skywalker a place at his side, but he refused to turn to the dark side. As Vader watched as Sidious tortured his son with deadly Force lightning, he recognised the light that remained within him and turned against his master; throwing him to his death, taking irreparable damage to his suit in the process.

With both master and apprentice perishing, the ancient line of the Sith Lords was finally broken and the Jedi prophecy fulfilled. Other dark side users would inevitably follow, but they could never claim to be a true Dark Lord of the Sith.