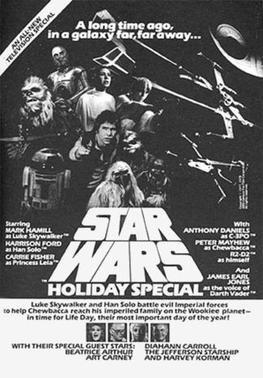 The Star Wars Holiday Special is a 1978 television special featuring the cast of the original Star Wars movie.

The main story follows the Wookiee celebration of Life Day (analogous to Christmas), and also contains musical and variety-show elements with celebrity appearances.

It received a notoriously bad reception from fans and was widely ridiculed to the point where it has never been rebroadcast or released on home video.

George Lucas did not have full control over the project and was not happy with the end result. Despite this, the Lucasfilm licensing department considered the in-universe segments of the show to be a mixture of S-canon, or C-canon if the elements were mentioned by other sources.