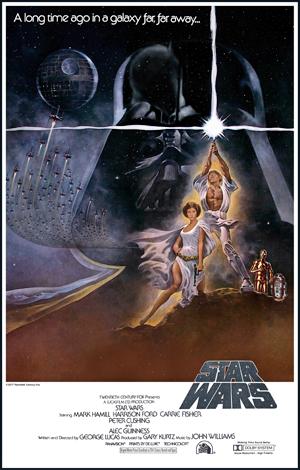 It is a period of civil war. Rebel spaceships, striking from a hidden base, have won their first victory against the evil Galactic Empire.

During the battle, Rebel spies managed to steal secret plans to the Empire's ultimate weapon, the DEATH STAR, an armored space station with enough power to destroy an entire planet.

Pursued by the Empire's sinister agents, Princess Leia races home aboard her starship, custodian of the stolen plans that can save her people and restore freedom to the galaxy....

Star Wars: Episode IV - A New Hope, originally simply titled Star Wars is the 1977 film that started the Star Wars franchise. Despite being the first film to be produced, it is the fourth episode of the Star Wars saga, excluding spin-offs.

Although widely dismissed by the studios of the time, it went on to smash box office records and became a global phenomenon that funded it's sequels and spawned an entire expanded universe. It is now regarded as one of the most important movies of all time, due to the huge advancements in special visual effects and editing that were made during production, some of which involved new technologies that had to be invented to create the film.

Since release it has been edited and reissued several times, including a Special Edition in 1997 which was issued for the film's 20th anniversary.

Luke Skywalker originally had a different surname in the original script. The change of name came so late in production that the scene where Luke rescues Leia from her cell on the Death Star had to be refilmed, as it had already been shot with the line: "I'm Luke Starkiller, I'm here to rescue you!"