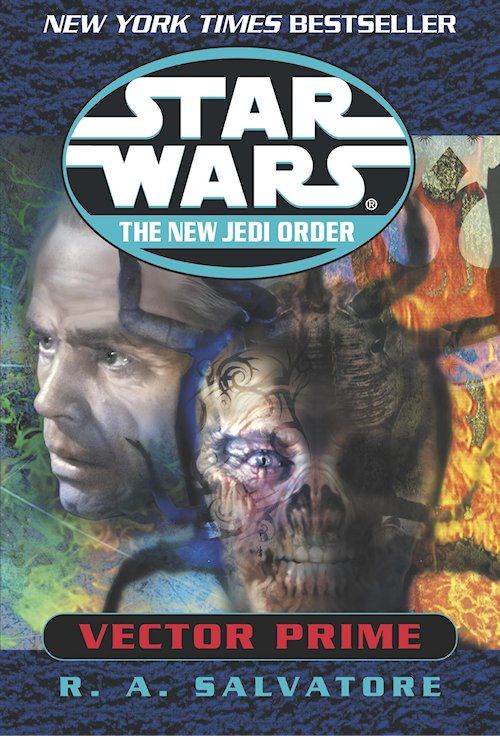 The New Jedi Order: Vector Prime is an expanded universe novel by R A Salvatore, published in 1999.

It was the first entry of the New Jedi Order era of the Star Wars timeline, and introduced the mysterious Yuuzhan Vong as they invaded the galaxy at the start of a devastating new conflict.

Never seem to have a Death Star lying around when you need one.

Vector Prime was extremely controversial when released due to the death of one of the "big four" classic trilogy characters. Although R A Salvatore received death threats due to the character's untimely demise, the decision was ultimately that of the editorial team at Del Rey, who felt that a major death was needed to renew interest in the Star Wars expanded universe and to drive the point that the series took place in uncharted territory where no character was safe.

Twenty-one years have passed since the heroes of the Rebel Alliance destroyed the Death Star, breaking the power of the Emperor. Since then, the New Republic has valiantly struggled to maintain peace and prosperity among the peoples of the galaxy. But unrest has begun to spread; tensions erupt in outbreaks of rebellion that, if unchecked, threaten to destroy the Republic's tenuous reign.

Into this volatile atmosphere comes Nom Anor, a charismatic firebrand who heats passions to the boiling point, sowing seeds of dissent for his own dark motives. In an effort to avert a catastrophic civil war, Leia travels with her daughter Jaina, her sister-in-law Mara Jade, and the loyal protocol droid C-3PO, to conduct face-to-face diplomatic negotiations with Nom Anor. But he proves resistant to Leia's entreaties - and, far more inexplicably, within the Force, where a being should be, was… blank space.

Meanwhile, Luke is plagued by reports of rogue Jedi Knights who are taking the law into their own hands. And so he wrestles with a dilemma: Should he attempt, in this climate of mistrust, to reestablish the legendary Jedi Council?

As the Jedi and the Republic focus on internal struggles, a new threat surfaces, unnoticed, beyond the farthest reaches of the Outer Rim. An enemy appears from outside known space, bearing weapons and technology unlike anything New Republic scientists have ever seen. Suddenly Luke, Mara, Leia, Han Solo, and Chewbacca - along with the Solo children - are thrust again into battle, to defend the freedom so many have fought and died for. But this time, all their courage, sacrifice, and even the power of the Force itself may not be enough.…

Unusually, the book had a television commercial aired on the Sci Fi Channel, narrated by Mark Hamill.

While deciding which major character would be killed, Del Rey were told that they could not kill Luke Skywalker.

According to Leland Chee, the keeper of the Holocron continuity database, the major death in Vector Prime was a big factor in the decision to wipe the slate clean when Disney acquired Lucasfilm.