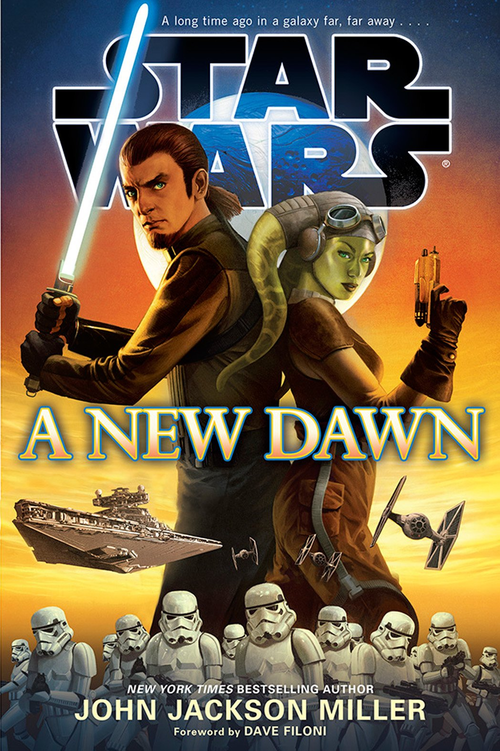 Star Wars: A New Dawn is a novel by John Jackson Miller. It was the first novel written in conjunction with the Lucasfilm Story Group as part of the new canon. It features characters from, and serves as a prequel to, the animated television series Star Wars Rebels.

"The war is over. The Separatists have been defeated, and the Jedi rebellion has been foiled. We stand on the threshold of a new beginning." — EMPEROR PALPATINE

Ever since the Jedi were marked for death and forced to flee Coruscant, Kanan Jarrus has devoted himself to staying alive rather than serving the Force. Wandering the galaxy alone, from one anonymous job to another, he avoids trouble—especially with the Empire—at all costs. So when he discovers a deadly conflict brewing between ruthless Imperial forces and desperate revolutionaries, he's not about to get caught in the crossfire. Then the brutal death of a friend at the Empire's hands forces the ex-Jedi to make a choice: bow down to fear, or stand up and fight.

But Jarrus won't be fighting alone. Unlikely allies, including a bomb-throwing radical, a former Imperial surveillance agent, a vengeful security officer, and the mysterious Hera Syndulla—an agent provocateur with motives of her own—team up with Jarrus to challenge the Empire. As a crisis of apocalyptic proportions unfolds on the planet Gorse, they must stand together against one of the Empire's most fearsome enforcers—for the sake of a world and its people